Posted on November 30, 2014 by ThoughtfulMirth

Check out Donny’s review of one of greats of early comics…. 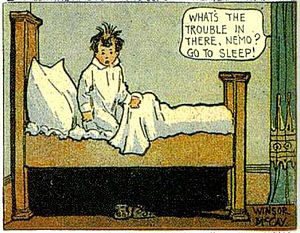 “It’s amazing to me how many otherwise educated people have never even heard of Winsor McCay.” – Art Spiegelman

John Carlin, in Masters of American Comics (2005), wrote, “Though most Americans were not fully aware of modern art until the Armory Show in 1913, they had already seen the essence of modernism in McKay’s comics without knowing it.” A true modern artist, McCay delighted in visual experimentation and always stretched his creativity by setting formal challenges for himself. His famous Little Nemo in Slumberland was a marvel of visual spectacle, draftsmanship, color, detail, and Art Nouveau flourishes, and he predicted all the best surrealist techniques well ahead of Dali and Magritte. He was the first grand master of comics!

Newspaper comic strips came about as an unexpected result of Joseph Pulitzer’s dream to reproduce great European paintings in full color in his papers. The four-color printing process produced colors that were far too garish for Rembrandts but worked well for cartoons. The first color newspaper cartoon was Hogan’s Alley, 1895. It was just a single panel gag cartoon, but it was so popular it helped ignite the “Newspaper Wars” (Pulitzer v. Hearst) of the 1890’s and 1900’s.

Rudolph Dirks deserves the credit for inventing the comic strip. In 1897, his Katzenjammer Kids introduced the multi-panel format as well as dialogue balloons, and certain graphic symbols like motion lines, seeing stars, and sweat drops. However formally innovative, Katzenjammer Kids was otherwise unimpressive, and like all of the cartoons of that period it was nothing but slapstick humor, bad puns, and ethnic slurs making fun of immigrants. All of the first newspaper comics were this kind of low-brow, pernicious junk like this.

Then came Winsor McCay. His Rarebit and Nemo strips were in part a middle class response to the otherwise very low-brow cartoons up until then (although there is still the occasional, unfortunate pickaninny caricature in his work). McCay’s art was tremendously popular, but he was bad at business and, despite his fame, was never as financially successful as many (much less talented) cartoonists of his day. Personally, he was short, shy, nervous, and inclined to melancholy (traits which certainly informed Rarebit – where a recurring theme features small, shy men dominated by tall or large wives, and McCay’s was an unhappy marriage). Most incredibly however, except for one crash course in linear perspective, he had no formal art training! That’s amazing for a man who rightfully deserves a place among Picasso, Matisse, Duchamp, and the greatest visual artists of the early modern period. McCay could draw not only very beautifully but freakishly fast. He used to perform in vaudeville doing a rapid drawing act. On stage he would produce 25 drawings in 15 minutes. His output was incredibly prolific, especially considering that he had no studio assistants or ghost artists.

His first strip was Little Sammy Sneeze, which was popular then but today isn’t terribly interesting – except for one early meta gag which would make Duchamp envious, in which Sammy sneezes so hard he breaks the panels of the comic strip. This is the first hint of McCay’s emerging artistic genius.

His first masterwork was Dream of the Rarebit Fiend. Rarebit does not have the same visual complexity as his Nemo (which would soon follow), but its themes are darker and more adult. The premise is simple enough for an elevator pitch: Some person experiences something strange, disturbing, and surreal (although that word didn’t exist in 1904) only to wake-up in the last panel from a bad dream induced by having eaten too much Welsh rarebit (cheese thinned with ale on toast). The cheese sauce-induced dreams reveal the phobias, hypocrisies, anxieties, and dark fantasies of the dreamers. They suffer nightmares about religion, alcoholism, homelessness, suicide, public speaking, embarrassment, death, and being buried alive. In a few of my favorite (and the creepiest) Rarebit strips:
• A teddy bear (a new toy craze in 1905) turns into a real bear and eats the baby
• A man becomes paralyzed and unable to react when birds nest in his mouth, mice crawl into his ear, and squirrels finally burrow into his chest
• A boxer beats-up several opponents in succession but becomes increasingly, horrifyingly covered in their blood and gore
• A man comes home late and his wife goes berserk and, with superhuman strength, pounds him to a broken pulp
• And a 1907 Rarebit features another great meta gag when a man dreams he is a pen-and-ink drawing

A full generation before the surrealists, McCay started exploring the unconscious dream-scape. It was very modern. Not only did the strip often allude to contemporary events (like the election of Theodore Roosevelt in 1904 or the Russo-Japanese War) but it generally confronts modern absurdist themes that prefigure Franz Kafka and Camus. Rarebit, more than Nemo, has a Freudian view of dreams as representations of anxieties. Freud’s Interpretation of Dreams was published in 1900 and hit the intellectual world like an atom bomb. There is no evidence that McCay read Freud (or that he didn’t), but Freud was certainly much talked-about in the New York art circles that McCay frequented, so he was certainly aware of Freud’s theories. 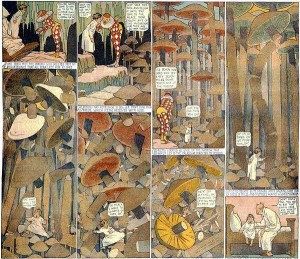 Little Nemo was aimed at children, but was beautiful and charming enough to be loved by adults. It was also the most visually sophisticated comic yet produced by 1905. Where most cartoonists worked only in regular grids, in Nemo the shape and arrangement of the panels was dictated by the story elements. (Check out the stair-step layout pictured above.) McCay made the basic unit the page and not the panels. He was among the first artists to explore the possibilities of whole-page compositions in comic forms – what Eisner (working two decades later) referred to as the “meta-panel.” Thus, McCay allowed the page to be read either as a story unfolding over a temporal sequence (like a film) or as a static arrangement of harmonious visual elements (like a modern painting) – thus realizing for the first time the hidden potential of comics as an art form. The panels tell the story, but the over-all composition is the whole page.

Nemo also had a better sense of panel-to-panel, “cinematic” movement than any other comic strip of its time. However, the first thing that always catches a new reader’s eye is McCay’s staggering skills as a draftsman. You can flip open any Little Nemo collection to a random page and be amazed by the pure visual beauty of the drawings in front of you – and it’s even more mind-blowing if you look at it side-by-side with the typical four-color fare from 1905-11. His coloring, too, is amazing. McCay annotated his original Nemo pages with copious and precise notes for the printers regarding the colors to be achieved in reproduction. Most comic books wouldn’t have such beautiful and subtle coloration until the mid-1980’s.

McCay’s only weakness is that he showed very little regard for the dialogue balloons. The lettering is often as illegible as the narration is redundant… but the words are mostly unnecessary anyway! You can legitimately become engrossed in his strips for hours without ever reading the (mostly unnecessary) dialogue at all. 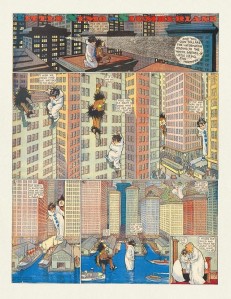 The strip is very good from the beginning, but Nemo really takes flight beginning with a September, 1907 sequence where Nemo grows into a giant and must carefully climb over buildings to make his way to the harbor. After returning to normal size, Nemo and his friends make their way through Befuddle Hall (January, 1908) where up and down become confused and they must walk on the walls and ceiling. These are often among the most reproduced pages of McCay’s gorgeous work.

McCay was also drawing a (little remembered) third strip between 1909 and 1911: Poor Jake. It was a didactic social awareness piece about exploited workers. Winsor McCay was a social realist of the Progressive Era (launched by Theodor Roosevelt in 1901). Before Poor Jake, his politics had already surfaced in a less too-on-the-nose way (and a more whimsical manner) in another famous Nemo sequence from March-April, 1908. Nemo visits Shantytown where he magically transforms the tenements into temples, heals the lame, and resurrects a girl on Easter Sunday. It is one of the rare times when Nemo becomes an active character and not just the passive victim of his dreams.

McCay’s progressive politics made him a kin to America’s most famous gang of painters from the period, the so-called Ashcan School. These painters (including Robert Henri, George Luks, William Glackens, and John Sloan) are best known for works portraying scenes of daily life in New York’s poorer neighborhoods. Many of them moonlighted as newspaper cartoonists, and McCay was personally acquainted with these great artists.

The great 1907-08 sequence of Nemo strips climaxes in July, 1908 with the famous galloping bed strip. Art Spiegelman has repeatedly pointed to this page as a masterpiece of early 20th century American art. Some things to note include:
• The height of the panels stretches to accommodate the growing bed
• The moon bounces along in rhythm with the cantering bed
• The moon joins two panels across the bottom tier
• The galloping bed trips over a church steeple (symbolic of…?)
• Nemo falls directly down to land in his bed in the panel below
This page is the strongest contender that I know of for “Greatest Achievement in Comics Prior to 1920.” It’s a masterpiece!

In later pages, McCay played around with the format and possibilities of a comic strip by having Nemo’s borders collapse and by drawing Nemo in a child’s style. Later pages of Nemo had characters breaking the fourth wall with their awareness that they were characters in a Sunday comic strip. The later strips take on a travelogue quality by having Nemo, aboard a zeppelin, visit New York, Chicago, Niagara Falls, and Montreal. McCay even brings in science-fiction elements (still an emerging genre in 1910) by having Nemo visit Mars.

In 1911 he quit Rarebit and Nemo (of which he had tiered) to draw “serious” editorial cartoons for William Randolph Hearst. Hearst was a socialist and in the 1920’s both Hearst and McCay (angered by the vast wealth gap of the ‘20’s) were even admirers of Benito Mussolini for a time. However, McCay usually did not depict contemporary politicians directly but drew allegories about the evils of child labor, alcohol, child abuse, runaway capitalism, and Russian Communism. These cartoons from the last 20 years of his life are technically well drawn but soulless in comparison to Nemo and Rarebit.

More interesting, though, in McCay’s late phase were his innovations in the new art form of animation. An indefatigable workaholic, McCay produced 4,000 drawings in one month for his first animated film – while still drawing Nemo and Rarebit that month. Between 1911 and 1921 he self-financed and self-produced ten animated short films. The most successful films were the first three about Gertie the Gentile Dinosaur (the first of which is imbedded below). McCay’s animation had a smoothness of movement that was unmatched until Walt Disney in the 1930’s, and he pioneered many animation techniques like inbetweening, registration marks, and cycling. An idealist (and no businessman) McCay refused to patent his innovations in animation; he just wanted to see the new art form grow. It may be fairly said that without Winsor McCay there could not have been a Walt Disney.

If you are interested in seeing more magic from this little titan of the early days of comics, http://comicstriplibrary.org/ has the entire run of Rarebit and Nemo strips online for free!